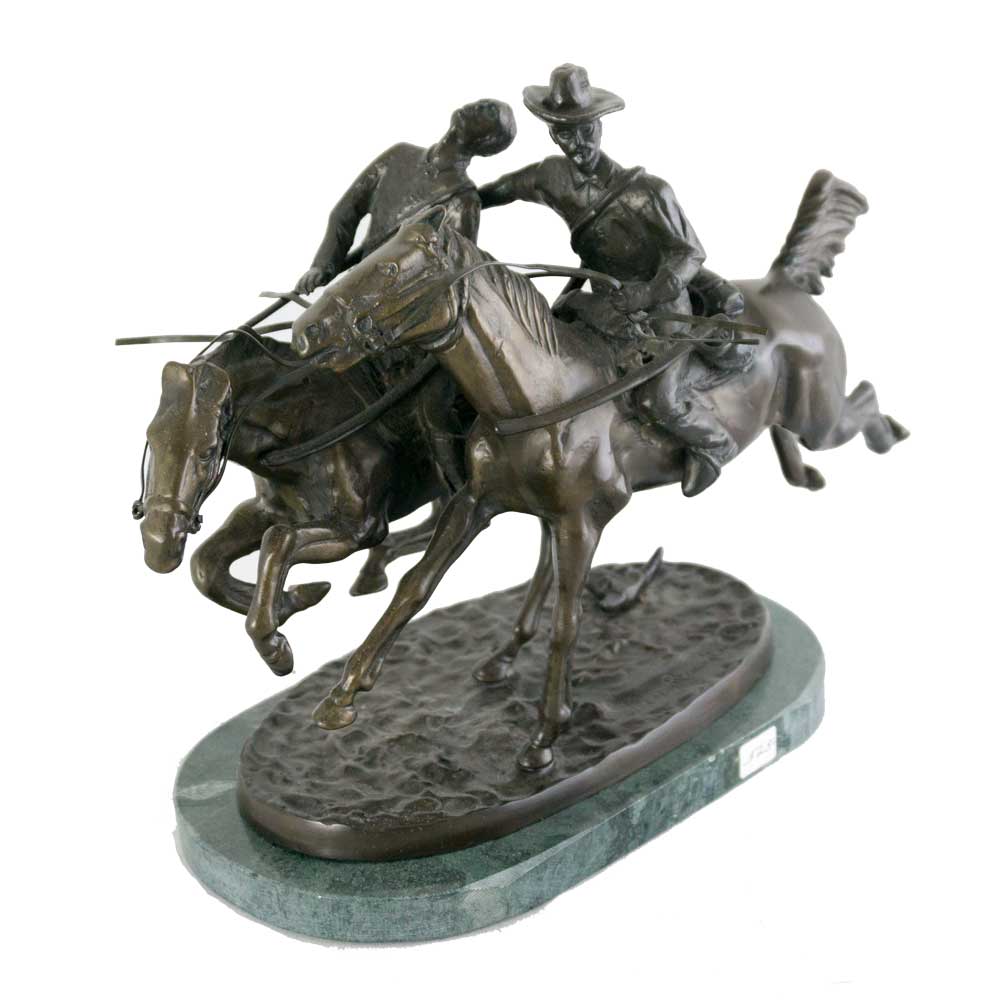 Frederic Remington (1861-1909) cast 22 different subjects. The first foundry with which he worked was the Henry-Bonnard Bronze Company in New York. Four different sculptures were cast in bronze, starting in 1895, using the sand-casting method. They were The Broncho Buster, The Wounded Bunkie, The Wicked Pony, and The Scalp. In 1900 Remington began working exclusively with the Roman Bronze Works, New York. They produced his bronzes using the lost-wax bronze casting process until his death in 1909. Remington’s widow, Eva, authorized the foundry to continue casting Remington’s bronzes, until her death in 1918. By direction of Eva Remington’s will, the foundry destroyed the molds shortly after her death.

In 1923 this Museum opened, holding Eva Remington’s collection of Remington’s art and archives. The institution maintained the copyrights on Remington’s bronzes until they expired in the 1960s. Illegal forgeries were made starting soon after Eva Remington’s death. Since the copyrights expired, there have been copies in just about all shapes, sizes, colors, etc. Some places are even making bronzes that Remington “might have made if he had lived longer.” There is no law governing the manufacture of these copies even though many of them clearly say, “Copyright by Frederic Remington” on them.

Here are two things to look for to reassure yourself further that a particular sculpture is not an original Remington bronze: 1. foundry mark. Most copies bear no indication of where they were made. Authentic sculptures are made with the foundry’s name clearly cast into the bronze base. 2. In very few instances will an authentic cast be mounted on a marble base. Copies are frequently mounted on them.

There is always great curiosity about numbering. Original bronzes are numbered sequentially. They were made and numbered more or less according to the demand, i.e. 1,2,3, etc. not 1/100 or 19/50. Many copies are misleadingly numbered in this second “3/100” fashion. The location of the number on original sculptures is usually under the bronze base.

Since most copies do not bear the name of the foundry that made them, it is a total mystery where and when they were made.

How Are Reproductions Made?

The most common method is for a sculpture to be reproduced is for a sculptor to look at photos of an original bronze and make a model in wax or clay. A mold is then made from the model to cast the copies in bronze. The other method, which brings better results, and the one which many companies would like you to believe they use, is by making recasts (also called surmoulages). To make a recast, an original sculpture is needed (although we’re sure there have been copies made of copies). Technicians take the surface impression of the sculpture with latex, then make a mold from that impression with which to cast copies. Using either method, details are often added that Remington never intended. The presence of elaborate detail is not an indication of authenticity.