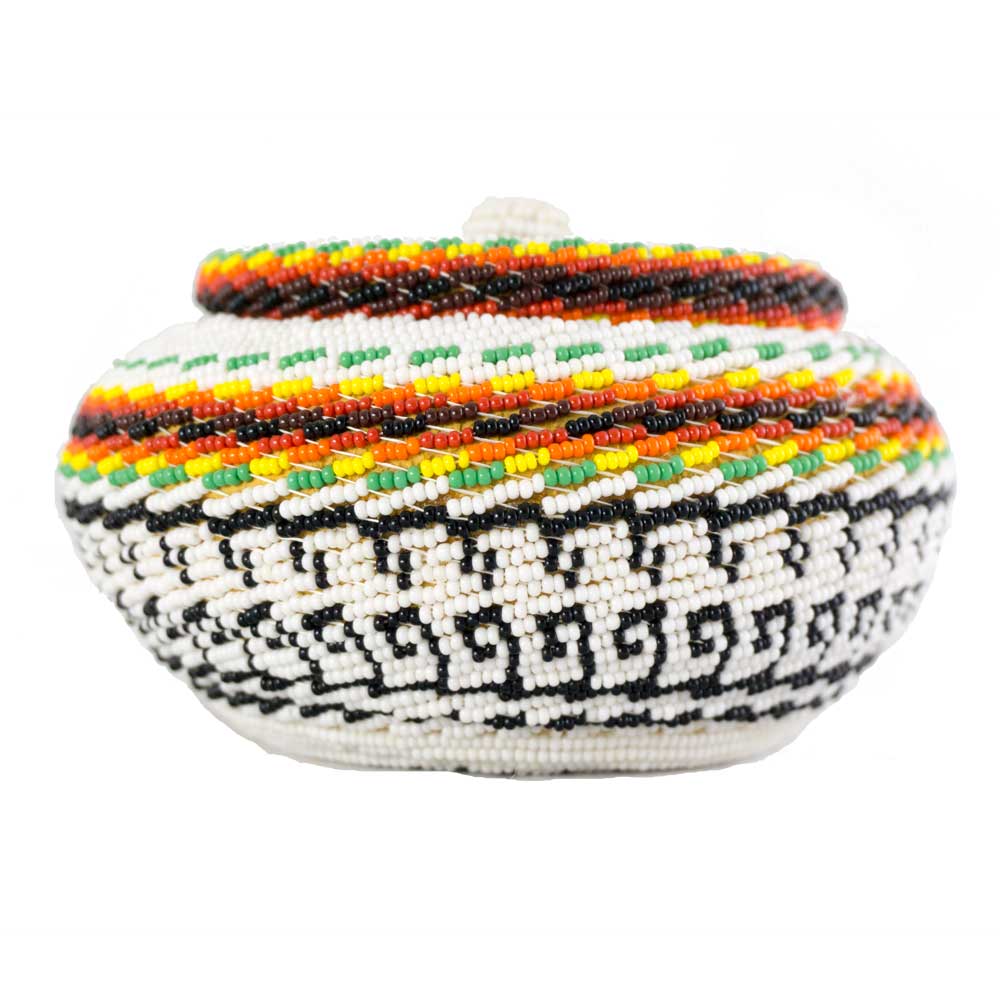 Shirley’s work is museum quality. She has won awards for it at the Gallup Ceremonials, and in Navajo shows at the Museum of Northern Arizona, in Flagstaff.

Shirley’s work is museum quality. She has won awards for it at the Gallup Ceremonials, and in Navajo shows at the Museum of Northern Arizona, in Flagstaff.

A Navajo daughter of the world famous Monument Valley, Shirley Jones Kills-in-Sight was born for the Underwater Clan, to the Mexican Clan. Her interest in beading came from watching others, but she is mostly self-taught. Being married to a Sioux husband and having lived in South Dakota, Shirley’s designs have a rich and varied influence.

Shirley waits for a design to form in her mind, then she takes a basket woven of yucca and sweet grass and covers it with leather, on which she will sew the beads with nylon thread. It is intense work, requiring complete concentration, and she will wear out 6 to 7 needles per basket. Many beaders find the small beads Shirley uses too tedious, which makes her fine work even more unique.

Shirley begins at the base of the basket, using a flat stitch to attach the beads. She estimates it takes 4 to 5 hours just to get the center started, an area about an inch and half in diameter. As the basket begins to curve she changes to a peyote stitch, named after a hallucinogenic plant used in Native American Ceremonials. Her beads come from around the world, for instance, opaque cut glass from Italy.

Once begun, Shirley generally works up to 10 hours a day on her project. It may take several weeks to complete a six inch tall covered basket. The design she visualized initially may change form as the colors flow and evolve in a graduation of light Shirley refers to as ‘fire”, “earth”, and “rainbow”.

“I want my work to be my children’s legacy”, Shirley says with feeling, “I keep some of my pieces for them.”

Shirley also does beadwork on belts, moccasins, and the traditional Sioux clothing her children wear as they perform dances at tribal ceremonials.

Her two daughters and son are too young to begin the kind of work Shirley is famous for, but she hopes they will want to learn it when they are older. For now they watch and wait, just as she got her start.