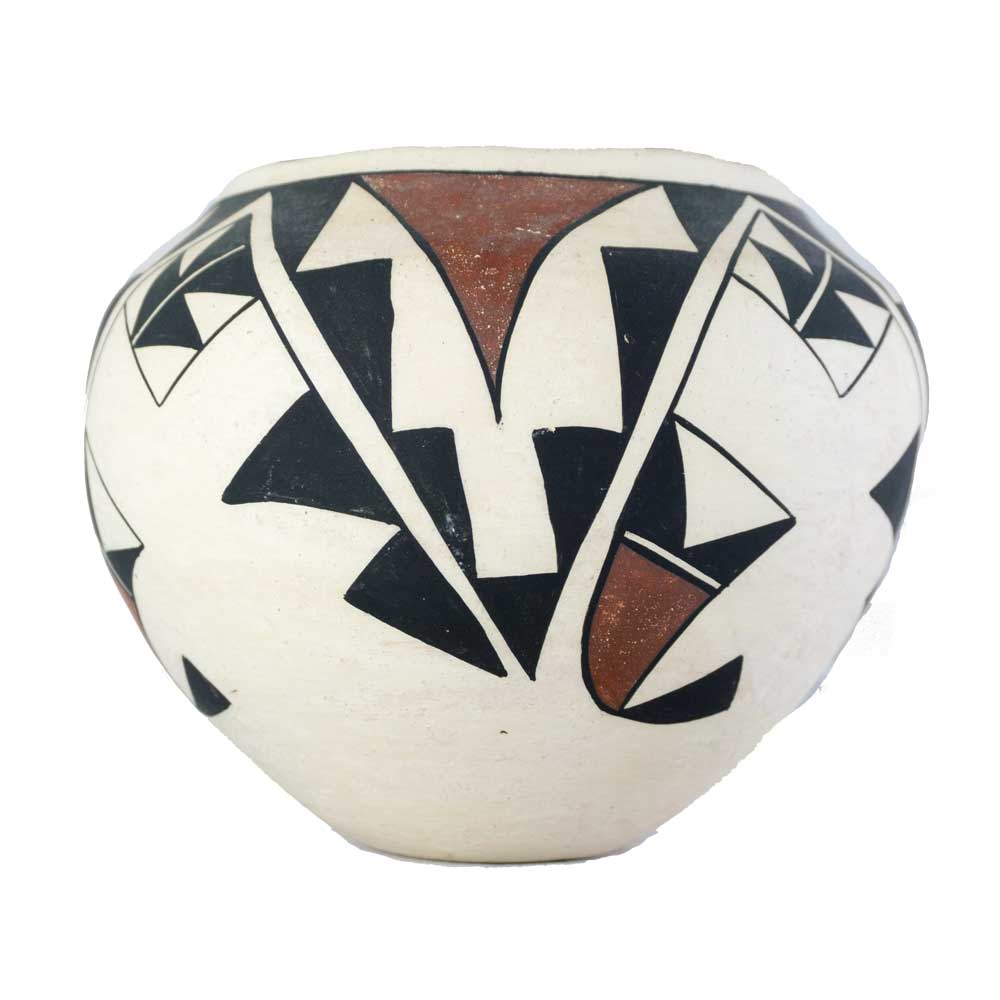 Lucy M. Lewis (1900-1992) was born and raised in Acoma Pueblo on Sky City mesa, a land formation southwest of Albuquerque that rises more than three hundred feet above the surrounding countryside. Since there were no schools on the mesa, Lucy received no formal education beyond that which is required of every Pueblo child as they grow up: she helped in the home, she learned the various steps and chants necessary to participate in rituals and ceremonies, and she began to make pottery when she was only seven or eight. She learned by watching her great-aunt Helice Vallo and other Acoma Pueblo women as they made traditional pottery for the kiva and for personal use. However, Lucy was never exposed to off-pueblo pottery influences, her creative inspiration was derived from the shards she found as she walked around the grounds of Acoma. A large amount of what she found on the ground was Mimbres-style pottery, characterized by black lines on a white slip. From the spark lit by those shards she developed her own methods of making pots.

In her teens she married Toribio and together they had nine children. She handled the household chores, helped her husband with the farming, and somehow found time to squeeze in her pottery making. Because of Acoma Pueblo’s remote location, Lucy was never exposed to (or interfered with by) archaeologists, museum curators, collectors, traders or tourists. She also did not travel to powwows or fairs, though she occasionally sold her pottery at the railroad station in Grants about 20 miles from Acoma. In spite of this relative isolation, Lucy Lewis is credited with sparking the revival of Mimbres black on white designs.

Her pottery first became known outside the pueblo when she first exhibited her wares in a juried competition in 1950. She took home several blue ribbons that year at the Annual Inter-Tribal Indian Ceremonial in Gallup, New Mexico. That brought her to the attention of Dr. Edgar Lee Hewett, Director of the Museum of New Mexico (the same Dr. Hewett who had worked with Maria Martinez years earlier). Hewett convinced her she needed to sign her pieces and as she took home more and more blue ribbons, her signature became more and more valuable. During the 1980s and 1990s Lewis received awards from the American Crafts Council, the College Art Association, the state of New Mexico, and the Honolulu Academy of Fine Arts. She continued to make pots until she was well into her 80s. Some of her daughters and grandchildren are still creating pottery using the methods and decorations she taught them.