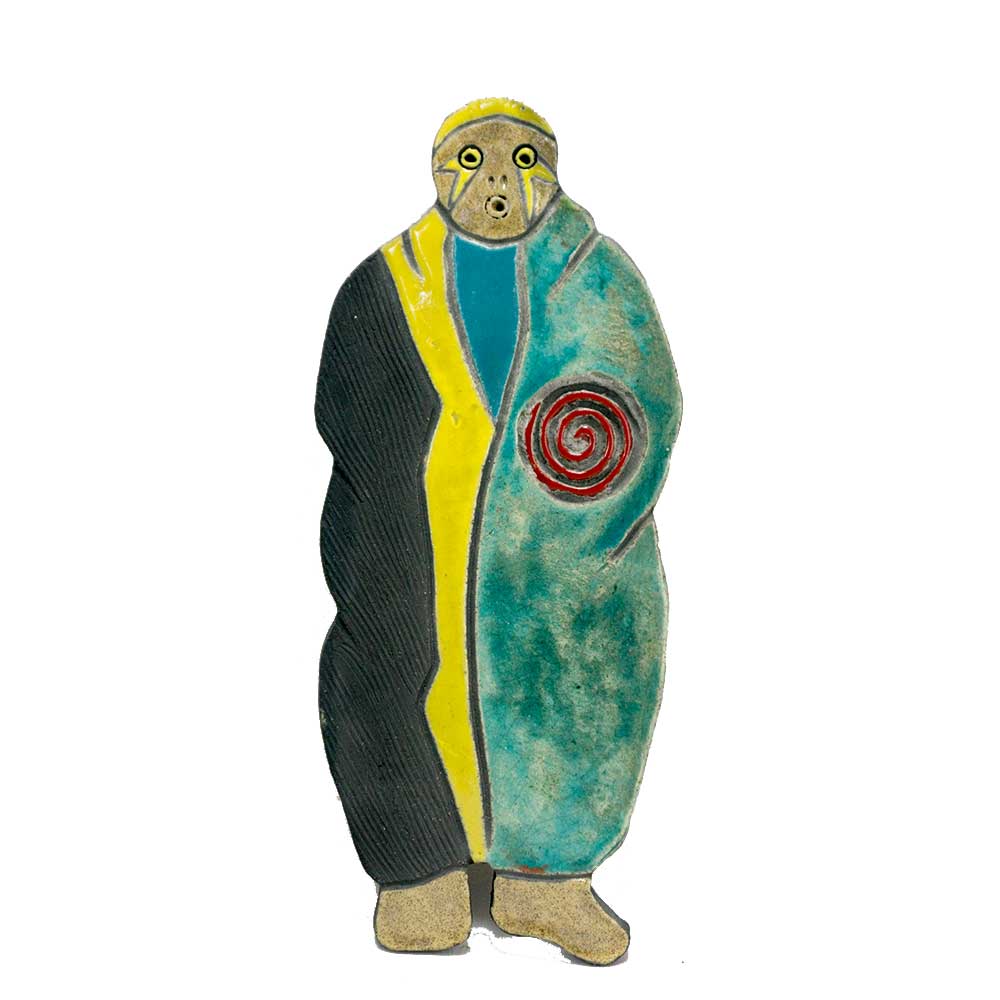 Jane creates clay sculpture and slab built (flattened clay) masks, platters and shields that are inspired by Woodland arts and artifacts. The images usually depict abstract animals, landscape and nature, with symbols of endurance, protection and celestial activity.
Jane Osti was herself awarded the second Cherokee National Treasure Award for Pottery in 2005. The award recognizes her deep knowledge of Cherokee culture and her continuing efforts in reviving, preserving, protecting and passing on Cherokee culture and practices that might otherwise be lost to future generations.
Extended Description

It was during the years she spent pursuing her formal education in art and education at Oklahoma’s Northeastern State University, and studying at various art programs and studios, that Cherokee artist Jane Osti met the person who would forever change her life. A class assignment to interview someone turned into a lifelong mentorship relationship with Cherokee National Treasure and Master Potter Anna Mitchell and an invitation to learn and help pass on the re-born knowledge, love and passion for traditional Cherokee pottery. While Anna taught her the traditional basics of clay processing, hand building and wood firing, she also passed on the deep sense of Cherokee culture, history and tradition that is embodied in this craft. Continuing in Anna Mitchell’s footstep’s, Jane continues to be both a teacher and a creator of Cherokee pottery, working with the next generation from her studio and gallery in Tahlequah, Oklahoma.

Jane’s work draws from prehistoric southeastern Woodland- and Mississippian-period themes and forms, with a unique and contemporary spirit. She specializes in coil and slab construction, stone polishing, as well as glazing, and wood – or raku-firing. Her work is noted for its often abstract animal, landscape and nature imagery and frequent use of endurance, protection and celestial themes in varying associations. She also creates figural vessels drawn from nature, such as gourds and squash. In addition, Jane is known for her traditional Cherokee animal effigy pots, also based on prehistoric forms.

Jane Osti was herself awarded the second Cherokee National Treasure Award for Pottery in 2005. The award recognizes her deep knowledge of Cherokee culture and her continuing efforts in reviving, preserving, protecting and passing on Cherokee culture and practices that might otherwise be lost to future generations.

Jane’s work has been exhibited in museums across the country and she has won awards for her work in numerous juried art shows. Her pottery is rich in earth colors of natural clay and rich in history of designs and patterns, bringing full circle ancient traditions in a contemporary world.