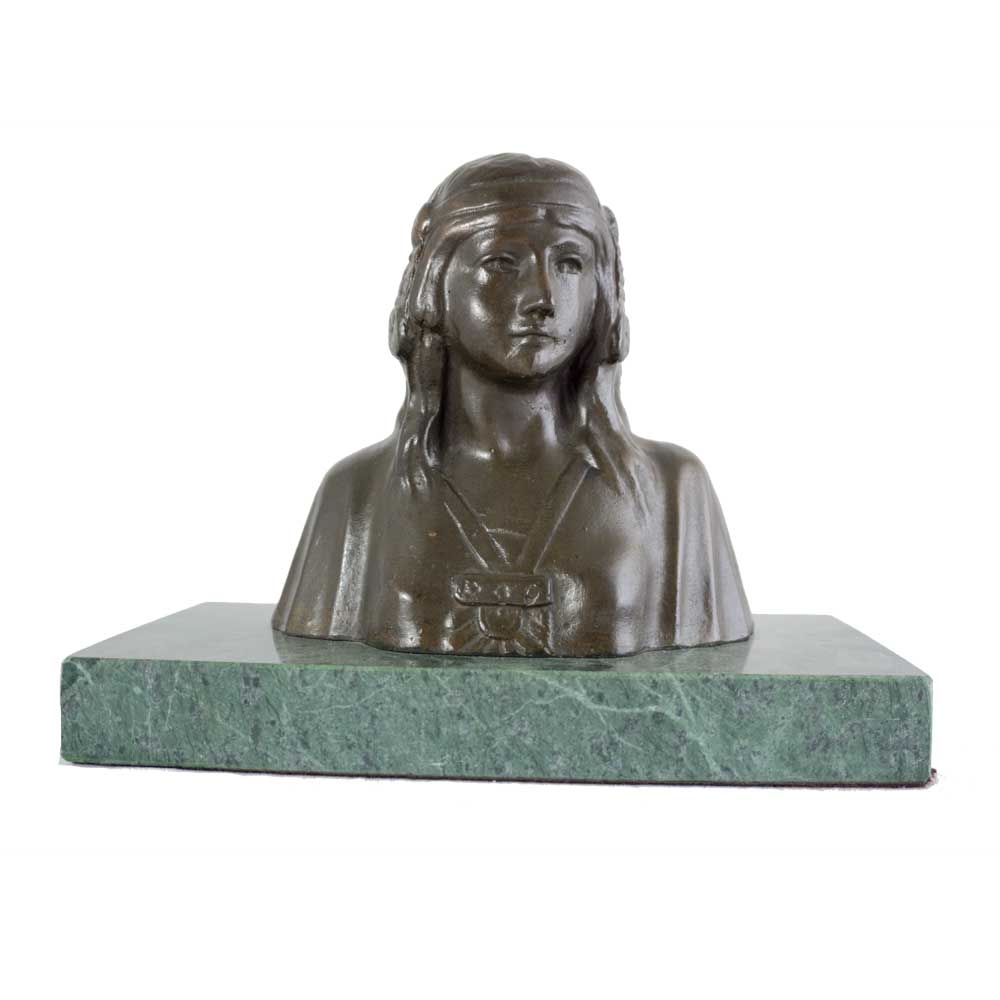 James Earle Fraser was a well-known American sculptor. He completed his most famous work “The end of the trail” at the age of 20. He designed the Buffalo nickel issued by the United States Treasury in 1913. Also the bust of Theodore Roosevelt that stands in the U.S. Senate Chamber. Since his death he is regarded as America’s foremost Western sculptor.

Fraser was born in Winona, Minnesota. His father, Thomas Fraser, was an engineer who worked for railroad companies as they expanded across the American West. A few months before his son was born, Thomas Fraser was one of a group of men sent to recover the remains of the 7th Cavalry Regiment following George Armstrong Custer’s disastrous engagement with the Lakota, Cheyenne, and Arapaho forces at the Battle of the Little Bighorn.
1913 Indian Head nickel
obverse and reverse
As a child, James Fraser was exposed to frontier life and the experience of Native Americans, who were being pushed ever further west or confined to Indian reservations. These early memories were expressed in many of his works, from his earlier trials, such as the bust Indian Princess,[2] pictured below, to his most famous projects, such as End of the Trail and the Indian Head (Buffalo) nickel.

Fraser began carving figures from pieces of limestone scavenged from a stone quarry close to his home near Mitchell, South Dakota in early life. He attended classes at the The School of The Art Institute of Chicago in 1890 and studied at the École des Beaux Arts and the Académie Julian in Paris in the late 19th century. Early in his career, Fraser served as an assistant to Richard Bock and Augustus Saint-Gaudens; he formed his own studio in 1902. He also taught at the Art Students League in New York City beginning in 1906, and later became its director. Among his earliest works were sculptural pieces at the World’s Columbian Exposition of 1893 and, for the San Francisco Exposition of 1915, one of his most famous pieces, End of the Trail.
Fraser’s sculpture End of the Trail, for which Chief John Big Tree claims he was the model.
While it was meant to be cast in bronze, material shortages due to World War I prevented this. After the Exposition, the original plaster statue was moved to Mooney’s Grove Park in Visalia, CA. Exposed to the elements, it slowly deteriorated until it was obtained by the National Cowboy & Western Heritage Museum in 1968 and restored. The restored statue is currently on display in the entryway of the Oklahoma City museum, and the original that sat in Visalia, CA, was replaced with a bronze replica. The original bronze replica statue of the End of the Trail Statue is located in Shaler Park, in Waupun, Wisconsin. The statue was purchased by inventor and sculptor, Clarence Addison Shaler, and donated to the City of Waupun on June 23, 1929.[3]

Fraser’s work in Washington includes The Authority of Law and The Contemplation of Justice at the U.S. Supreme Court; the south pediment and statues at the National Archives; Alexander Hamilton and Albert Gallatin at the U.S. Treasury; and the Second Division Monument, completed with the firm of architect John Russell Pope. His commissions also include coins and medals, such as the World War I Victory Medal, the Navy Cross,[4] and the Indian Head (Buffalo) nickel. This coin was discontinued after 1938, but has since been reprised in 2001 on a US commemorative coin, and more recently on a gold buffalo one ounce gold bullion coin.

Fraser’s major works include two heroic bronze equestrian statues titled The Arts of Peace, designed for the entrance to the Rock Creek and Potomac Parkway, behind the Lincoln Memorial. The pair was a companion to sculptor Leo Friedlander’s The Arts of War, installed immediately to the south at the east end of Arlington Memorial Bridge. The groups had been designed in the 1930s but were not cast until the 1950s, because of a shortage of metals during World War II.

Muralist Barry Faulkner, a friend of Fraser’s from their days in Paris together described Fraser like this: “His character was like a good piece of Scotch tweed, handsome, durable and warm.” [see Wilkonson, References] Fraser’s papers and those of his wife, sculptor Laura Gardin Fraser, are held at the Special Collections Research Ccenter at Syracuse University Library, the Smithsonian Archives of American Art, and the National Cowboy & Western Heritage Museum.[5]

James Earle Fraser died on October 11, 1953 at Westport, Connecticut and is buried in Willowbrook Cemetery.[6]