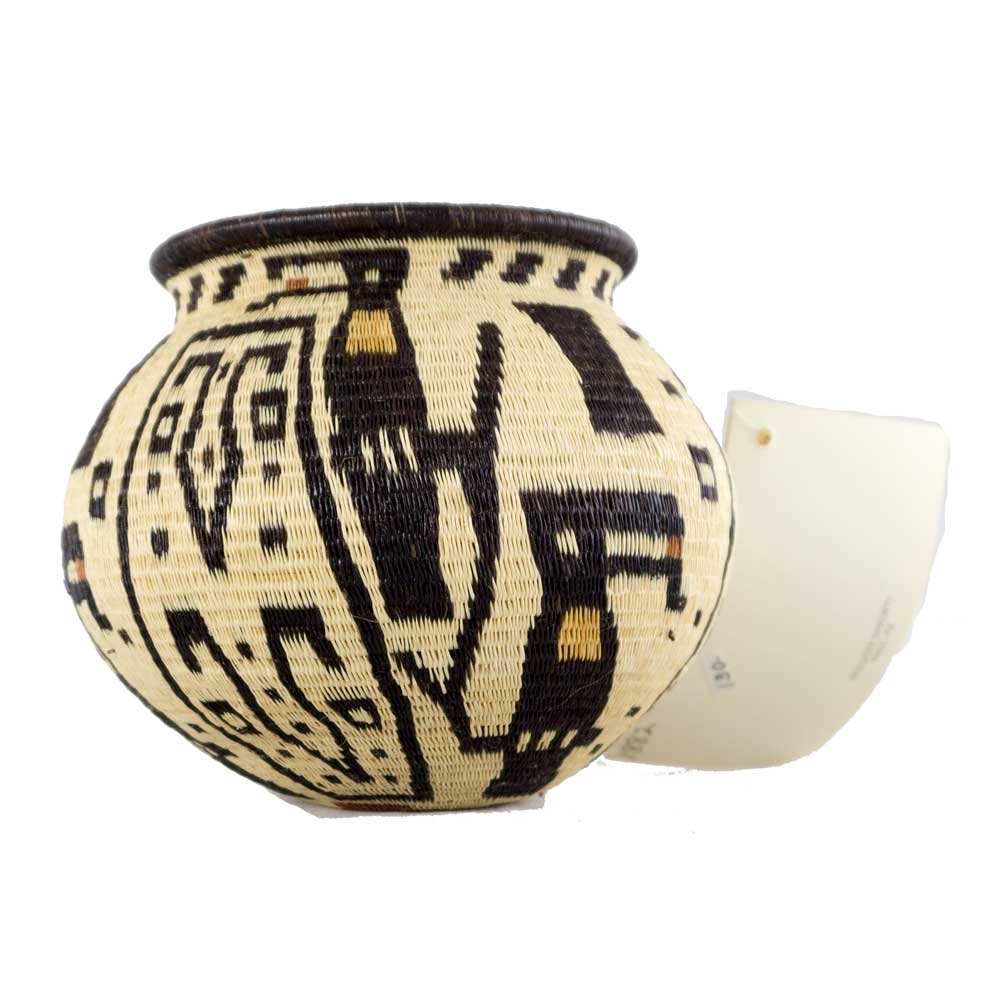 Choco Baskets of the Darien Indians

Hosig di are fine baskets by the Wounaan Indians of the Darien Rainforest of Panama. Silk-fine strands of the black palm Astrocaryum standleyanum, called chunga, colored with vegetal and organic dyes, are sewn over coils of Carludovica palmate, called naguala.

The Wounaan and Embera Indians, who “weave” fine baskets and call the Darien home, were once called Choco, since they originally migrated in the late 1700’s from the Colombian province of Choco. Some 3,000 years ago, they spoke the same language. Today they hardly understand more than a few words in each other’s languages and communicate through Spanish.

The Wounaan name for the original, fine traditional coil-construction baskets made of chunga is hosig di. More tightly woven and finer than their traditional woven utilitarian baskets and made from several rainforest materials, thehosig di art form was passed since earliest times from mother to daughter. Baskets prior to 1982 were sparsely decorated, if at all, but a professor studying Choco language groups changed all that. Encouraged by Ron Binder of the Summer Institute of Linguistics, the Wounaan began to impose onto the new baskets rainforest bird, flower, and animal designs as well as geometries borrowed from pre-Colombian pottery and textiles. By 1990, extraordinary baskets exported from the Darien began to appear in collections across the American Southwest, then throughout the world.

While the original functions of early hosig di are still a mystery, it was speculated that their ability to hold water made them potential carrying or storage vessels. However, that theory seems to collapse under the evidence that pottery for water vessels has existed as early as 2000 B.C. in the Amazon Basin and similar regions. In the early 16th century, when Spaniards debarked onto the coast of Panama, they discovered pottery shards by the thousands. Wounaan elders and legends support the pottery-for-water-storage theories.

According to Milda de Membora, wife of Tonny Membora, the current Wounaan President of the Wounaan General Congress and head of the Wounaan Cooperative, hosig di were originally created to carry matches, called fosforos. But other tribal leaders disagree and contend that the earlier fine baskets most likely had lids and secreted small treasures and precious objects. Bone needles to sew the baskets most likely preceded the steel needles used today in recent times.

It has been said that the Wounaan are the originators of fme art while the Embeni are imitators, and many gallery owners in North America and Europe concur that the Wounaan excel in this art form. However, individual Embeni weavers compete for fine workmanship. Our collection is almost entirely Wounaan.

The most dangerous tree for any brave foot traveler through the roadless, nearly impenetrable Darien is the Astrocaryum standleyanum. Chunga to the Wounaan, this black palm protects itself with vicious spines up to six inches long. The hard black wood from the chunga is prized for house posts, and the leaves are used in curandero ceremonies. According to elders, their ancient ancestors used strong rope braided from chunga to tie demons that chased them to the exposed roots of trees along the river. When the water level rose, the demons would drown.

Only the young, tender emerging leaves at the top of the spiny-trunked chunga is used to create hosig di. Historically, the entire tree had to be felled, and its trunk either used or left to become more organic material on the floor of the rainforest. Increasingly, more sustainable practices, such as the use of tall ladders and replanting are being developed.

Chunga is so closely linked to Wounaan tradition and daily life that each basket begins its creation with an inherent spiritual quality. In fact, in an article by written by Stuart G.R. Warner W. and published in the summer 1996 issue of Native Peoples magazine, the Wounaan are referred to as “spirit weavers.”

Warner W. states that the Wounaan Indian women have clearly emerged as the most masterful basket weavers in Panama. He also quotes anthropologist Andrew Hunter Whiteford, then curator at the Wheelwright Museum and respected expert in Native American baskets, as proclaiming “The Wounaan coiled baskets are not only creative in design, but are technically among the finest I have seen.” And, indeed, collectors are finding Wounaan baskets rival the finest in the world.