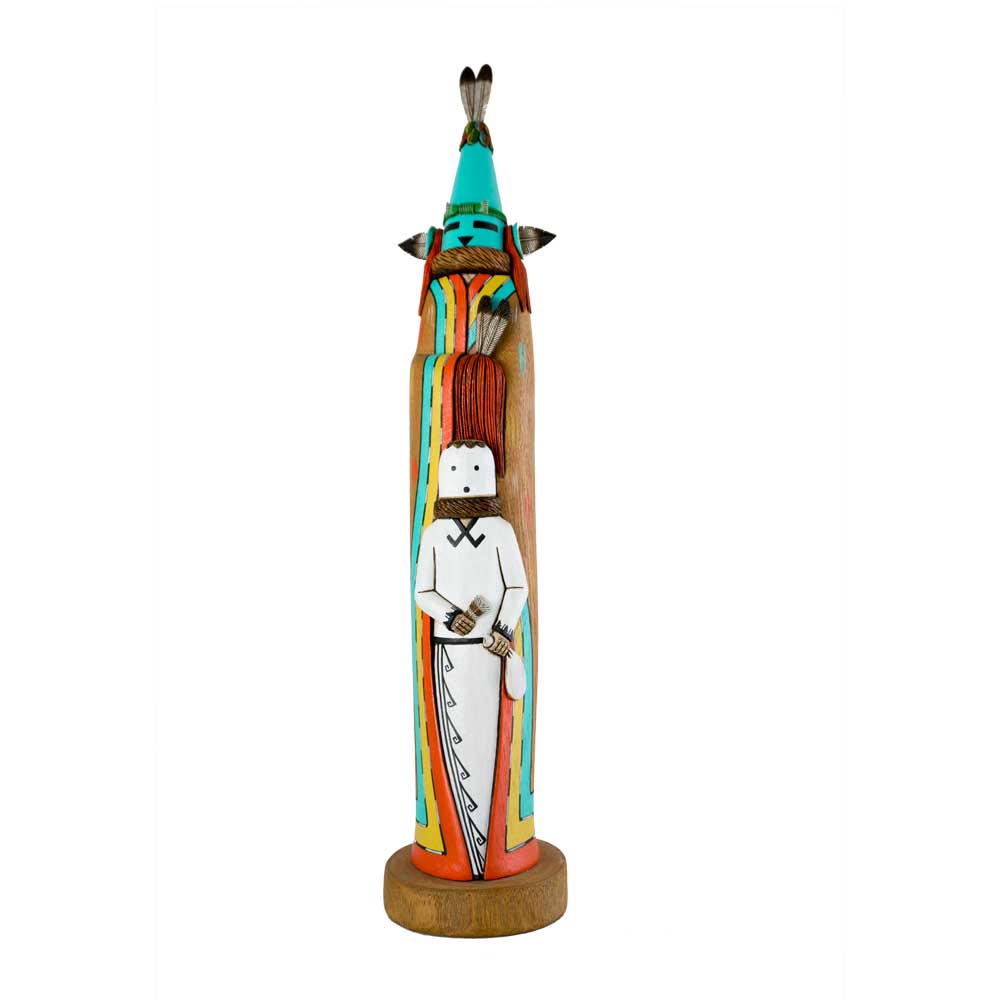 Wilfred Kaye is the brother of well-known Hopi sculptural carver, Wilmer Kaye. Both are talented carvers who have made a name for themselves with their stylized Hopi sculptures. These pieces always center on Hopi kachina themes, with sometimes abstract symbols and other Hopi designs featured throughout.
Extended Description

Aholi is the companion (Kachina Chief’s Lieutenant) of Eototo during *Powamu and aids him in the task of bringing rain. While Eototo is present on all three mesas, Aholi visits only on Third Mesa.

Aholi is a beautiful kachina in his multicolored cloak and tall blue helmet but is of less importance than the very plain Eototo. On the back of his cloak is a likeness of Muyingwa, one of the Germ Gods responsible for the germination of the seeds. Aholi wears a white kilt, a sash, and a fox skin. He wears red moccasins and carries a staff or wand.

Aholi carries a wand marked with a star on the end, and as the plumed water serpent, two jars dedicated to him are painted with pointed star emblems

Aholi is the patron saint (wuya) of the Pikyas or Young Corn Clan who care for the seed corn. The colors on his cloak are said to represent the flowers and brightness of summer.

Legend has it that the Aholi and Eototo kachinas were partners ages ago in a different land. Aholi stayed behind to fight a rear guard action, then had his throat cut to allow Eototo time to escape as leader. After many lengthy migrations throughout the Southwest, they were reunited at Old Oraibi.

Aholi’s name appears to derive from the Hopi word ahulti, or “return” which was the promise that the departing Quetzalcoatl made his people when he fled the Toltec capital of Tula for the mythical land of Tlillan

* The Powamu Ceremony is also called the Bean Planting Festival. It is observed in late January or early February and lasts 8 days.

Eototo is the chief of all kachinas and knows all of the ceremonies. He is the spiritual counterpart of the village chief and as such is called “father” of all the kachinas. He controls the seasons and is sometimes called the husband of Hahai-i Wuhti.

During the Powamu or Bean Dance on Third Mesa, he conducts an elaborate ceremony with his lieutenant, Aholi. He draws cloud symbols in corn flower on the ground pointing into the village.

Aholi places his ceremonial staff on these and roars out his call. Then they both proceed onward toward the village. This is designed to draw the clouds and moisture into the pueblo.

Eototo “goes to the north end of the kiva, rubs a handful of sacred meal to the north side of the hatchway and then pours a little water into the kiva, which is caught up in a bowl by a man standing on a ladder.”  This offering to the north is then repeated to the other three cardinal directions. Water and the fruitfulness of the earth are thus what his appearance at Powamu promises to the Hopi.

Aholi and Eototo kachinas went to the Red Land of the south and brought back squash, “after long wanderings” an echo of the legend on which Powamu itself is based. Eototo does, in fact, appear to derive from the red land of the south, from the primordial Aztec god of creation, Ometeotl, a version of whose name he appears to have adopted.

Ometeotl was personified in the legendary figure of Quetzalcoatl, one of Mesoamerica’s most popular gods. Ometeotl controlled the rain as Tlaloc, the sun as Tonatiuh, the corn as the Mother Goddesses. To the Hopi, as Eototo, he brings the “gifts of nature” back to the villages at Powamu.